Various predators of phasmids have been recorded under wild and captive conditions, including monkeys, rats, birds, frogs, lizards, spiders, praying mantids, ants, and humans. In addition phasmids are attacked by mites, parasitoid flies, and biting midges (Bedford, 1978), and the eggs may be attacked by parasitoid wasps (Rapp, 1995), or be carried off by ants. In captivity I have seen phasmids being eaten by spiders, lizards, praying mantids, axolotls, newts, frogs, scorpions, ladybirds, and ants.

On Mt Kinabalu, in Sabah, I photographed a large nymph of the wingless variety of Asceles margaritatus Redtenbacher being eaten by a spider (Bragg, 1992). An investigation into phasmids as prey of spiders (Nentwig, 1990) concluded that they are very palatable to spiders. There are however only two previous records of spiders eating phasmids in the wild (Robinson & Robinson, 1973; Robinson & Lubin, 1979); a record of Graeffea crouani (Le Guillou) being eaten by a spider (Swaine, 1969) does not indicate if this was in captivity or in the wild. 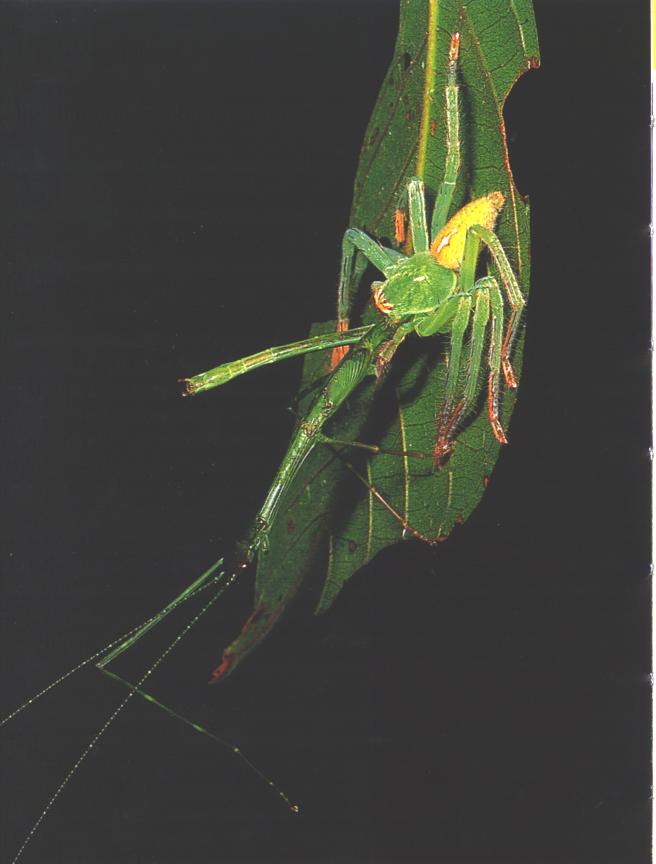 On Mt Serapi, in Sarawak, I have seen a male Carausius abbreviates Brunner with half the abdomen missing which I believe was most likely to have been caused by a praying mantis. In captivity, a mantis catching hold of a phasmid by the abdomen and starting to eat it without having a hold on the rest of the body often results in the phasmid escaping. There is only one definite record of a mantis eating a phasmid in the wild (Paine, 1968: 568).

Allan Harman when in Laos saw a dragonfly take a male winged phasmid (genus & species unknown) in the air to the ground. When he intervened the dragonfly flew away with its prey.

These have been reported to prey on nymphs in captivity.

On Mt Serapi I found an adult female Orthonecroscia pulcherrima Kirby on the road, being eaten by ants; it was not clear if the phasmid had died of other causes or whether it had been killed by the ants. A similar situation was found with a male Lonchodes brevipes Gray on a large leaf in Singapore. At Kuala Belalong a female Acacus was collected and placed in a plastic bag suspended 2m above the ground on a wooden pole supporting our sleeping shelter; the following morning the bag was full of small ants and the phasmid was dead.

In the primates gallery of the Natural History Museum, London, there is a photograph of a Loris feeding on a stick insect (genus Eurycnema).

Humans are known to eat eggs of Haaniella grayii (Westwood) in western Sarawak (Bragg, 1990) and whole Haaniella echinata in the area around Kapit in Sarawak (Bragg, 2001). There are also reports of phasmids being eaten in New Guinea. In the early 19th century the hind legs of Eurycantha were used as fish hooks on Goodenough Island near New Guinea (Balfour, 1915).