Do you have records of stick insects found in the wild in the UK between 1910 and 1980?

Members of the PSG have been actively involved in taking such records for many years. See Malcolm Lee's article for more information.

When rearing phasmids, it is not a good idea to keep closely related species together as interbreeding may be possible, with resultant bybrid offspring. However, Medauroidea and Carausius belong to different subfamilies, so successful interbreeding is unlikely to happen.

Can you tell me which phasmid species are native to Europe? Are range maps available?

Try the Phasmida Species File online: www.phasmida.speciesfile.org. Go to Search, then drop down to 'Faunal List' to work down through the geographic levels. This brings up a list of species with countries listed and maps. 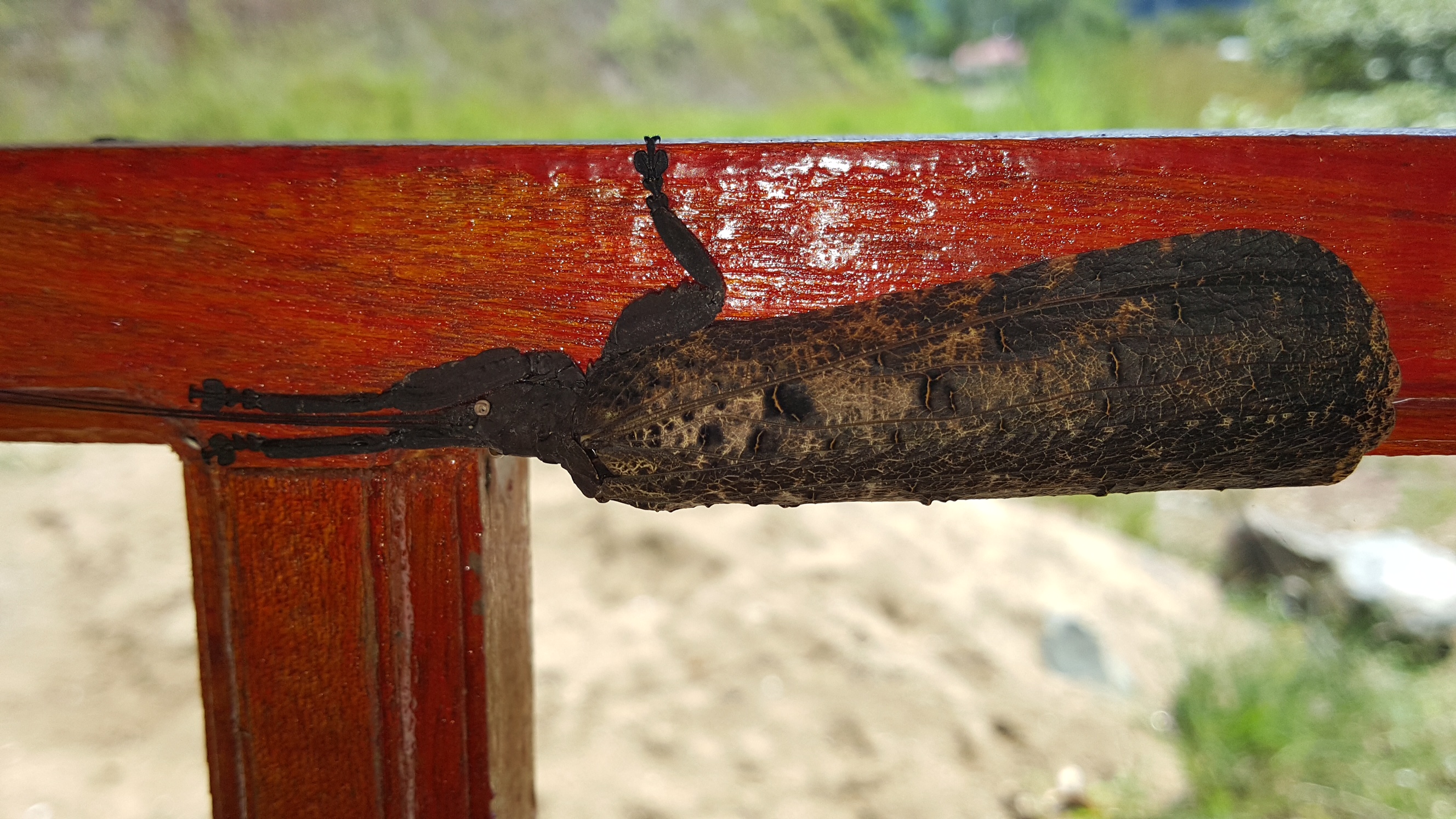 I found this insect in Jambi Provence, Sumatra. Is it a phasmid?

This is a bush cricket, Orthoptera, Tettigoniidae, Pseudophyllinae, a group whose wings all resemble live or dead leaves, or tree bark. There are phasmids which have similar foliose limbs and wing patterns to this but usually the abdomen is much longer than the wings.

The pronotum is the characteristic saddle shape of orthopteroids, a group including grasshoppers and crickets and is closely related to phasmids. This species is probably Sathrophyllia femorata (F.) which is fairly widespread in tropical Asia and western Malaysia.

You may like to visit the Orthoptera Species File online to find out more about this group, specifically their page for this species.

What are the shells of Phasmid ova made from?

The insect exoskeleton is formed of proteinaceous chitin [pronounced ky-tin] which may be hardened with scleratin (also found in hard mandibles). Females lay eggs formed of a protein called chorionin, producing a chorion. Inside this, the embryo may develop a wax layer to prevent drying out (especially eggs laid in damp conditions) and a layer of tough cuticle formed of chitin.

Google searches for eggs of stick insects mainly produces adverts for sales of eggs! However, there have been various specialised studies (Clark 1976; Hughes 1992; Mazzini 1993) on the structure of phasmid eggs.

Are there any Phasmids native to the UK?

There are several species of Phasmid that have become naturalised in the UK. This topic is discussed in more detail here: UK Phasmids. If you find stick insects in the UK you can report them using our online phasmid recording form.

Some indigenous people do use Phasmids as a food. Stone (1992) reports Extatosoma tiaratum is eaten by natives of Papua New Guinea (although as E. tiaratum is not found in this region the author probably refers to Eurycantha or Extatosoma popa). The insects eat the leaves of the sago palm, which are used as a thatching material. When the leaves are collected any tiaratum found are skewered on appointed sticks, pushed from the abdomen up through the head. The insects are then spit roasted on any open fire until the legs fall off.

Bragg (1990) reports that villagers of the Bideyuh tribe in Sawawak eat the eggs of Haaniella grayi grayi. The eggs are removed from the abdomen of adult females, boiled for 30 seconds, shelled and eaten. Bragg (2001) also reports the Iban tribe in Sarawak eat Haaniella echinata, not just the eggs.

How long do Phasmids live?

Adults may live from several weeks to a few years. Males generally have a shorter lifespan than females. Males of Phyllium bioculatum often only live for around three weeks as adults. Dares verrucosus may have a lifespan of up to five years (Brock, 1999).

How many eggs do Phasmids lay?

Stick insects do not show any level of parental care (apart from the fact that some species selectively position their eggs). This will almost certainly be a mating pair, the male being the smaller individual that is on top.

What is the collective noun for a group of stick insects?

Stick insects are not social creatures, so there is no collective noun!

What is the heaviest Phasmid?

Females of Heteropteryx dilatata are the heaviest known Phasmids. A female laden with eggs may weigh in excess of 65g (Brock, 1999). The heaviest recorded specimen at a PSG meeting (belonging to Kristien Rabaey and Rob Simoens) weighed in at 49.2g (Smith, 2007), but culture stocks are likely to be significantly smaller than wild specimens.

What is the longest Phasmid?

The longest described species is currently Phobaeticus chani. For more details please see our article on The World's Longest Insect.

Is it safe to feed Phasmids leaves treated with Beauveria bassiana (bioceres WP)?

We understand that Beauveria bassiana is fungus which is specific to flies, so it is possible that phasmids would not be affected. Usually the fungi which target insects are group-specific. However any substance which will kill a range of insect pests will also kill phasmids; we have previously received enquiries about phasmids dying when fly-spray had been used in the same room. For this reason, we recommend you always source foodplants that have not been treated with any pesticides.